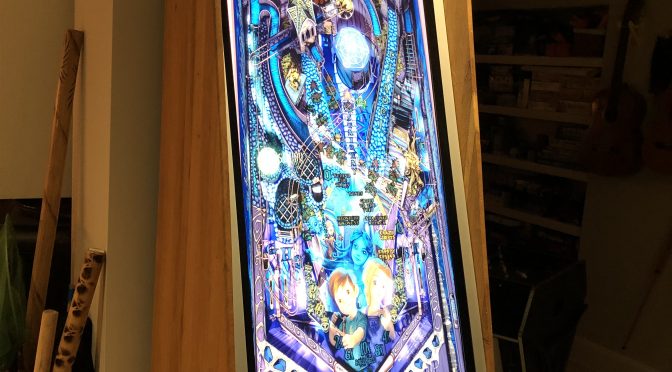 The Dell Optiplex shows a BIOS error when the front cover is not connected (and I threw it away before realizing I should have kept the cable). So I added an additional Arduino that emulates a keyboard and sends an “F2” keystroke 5 seconds after power-up.

I am particular proud of the inductive plunger, which allows skill shots without use of a linear potentiometer (no wear!). You can Google “Arduino Inductance LM339” and will find good description of how to do it. Schematics and board can be found in the resource section.

One problem remains unsolved: I need an external keyboard to shutdown windows. I did not want to mess with any software that maps keystrokes, so at the end of the gaming night, I pull out a little wireless keyboard and shutdown Windows. No enough of an inconvenience to warrant drilling another hole in the cabinet.

Cabinet
I ordered a kitchen worktop (2m x 0.9m x 2cm), cut it into 12cm wide boards of 2cm thicknes and various lengths, halved the thickness to about 8mm (thereby doubling the number of boards), glued the boards together to form 8mm thick sheets and cut the sides of the cabinet. Easy.
Could have ordered oak boards right away.
<LINK TO CABINET>

For the subwoofer and speaker cut-outs I used a laminate cutter (also known as a hand router), with a ball bearing at the tip. I printed jigs with my 3D printer that I screwed to the bottom of the board to guide the router.
This produced super neat and perfectly round cutouts.

I used a biscuit jointer when making the large boards. That was a stupid idea because you need to know where you make the cuts and ensure there’s no biscuit where you cut the board: it looks ugly when the biscuit shines through at an edge, like the diagonal cut that I had to make for the front of the cabinet.

Windows PC
The Dell Optiplex 3020 was gutted and basically only the mainboard survived, mounted on an open frame at a 20 degree angle. The Dell PSU was replaced with a Corsair VX550 (the Optiplex mainboard requires a PSU adapter cable which can be ordered from Amazon for £10. A cheap 256GB SSD stores the data.

Beware that the Dell motherboard will report an error and not booting unless the frontpanel is attached. I learned the hard way AFTER I had thrown away the Dell case and NOT retained the front panel or cable. So I programmed an Arduino to simulate an “F2” keypress shortly after boot to get past the error message.

The mainboard is mounted at an angle on a simple frame.

I build a pine frame that the monitor rests on, with an 5mm tempered glass pane on top. Black spray paint from the back creates a nice bezel that covers the edge of the display and the wooden frame. Everything is held in place by 20x30mm aluminium profiles (I screwed up and cut one side 1mm too short, so had to patch it. not my proudest moment, but I ran out of profile and then lockdown hit and I couldn’t get to the hardware store).

The small top screen is a super cheap AliExpress 1024×600 screen. A small OLED display would have been better I suspect, because I went a bit too cheap on the smalls screen and as a result it’s not quite as bright as I would have liked it to be.

Buttons and Plunger/Inductance Meter
Figuring out how to measure the position of the plunger with a coil took the longest. Usually you either trigger a switch or pull a linear potentiometer back and forth. The latter allows trick shots.

I did not like the idea to attach a potentiometer to the plunger and having to deal with the mechanical hassle, potentially incurring problems after hours of use (the plunger is difficult to reach and not easily removable.

The idea was to wind a coil around the plunger and as the plunger retracts, it pulls out of the coil which should change the magnetic flow and the inductance of the coil.

There are great guides out there that describe how to use an Arduino to measure inductance. So I thought how hard can it be?

The circuit works as follows:

Was it worth it?
You will find plenty of people on the Internet telling you that virtual pinball machines suck. I think differently. Virtual tables cannot compete with the tactile feedback and nostalgia offered by a real pinball machine. You have to look at them as a class of their own. Is it like a “real” pinball machine? Hell no! It’s a vertical screen. However, the experience is quite engaging, the FX3 software is as realistic as it gets. The reduced space requirement and the ultimate flexibility and freedom to play any pinball machine I like and owning three dozen different tables in one package makes it all worth while.
I enjoyed the build and figuring out how to make the inductive plunger work. After about 8 months, playing my vertical pinball machine is still fun and it’s cool to see new tables being released each months.